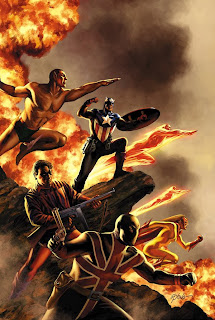 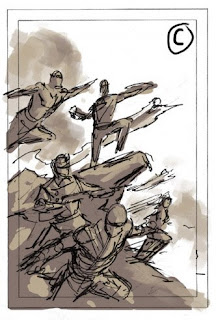 I absolutely love that you're doing a Variant cover for the series! I really get a kick out of seeing you draw the Invaders. Too bad that issue is many months away

Seriously though, it's a great cover and has a great Invaders "feel" with the explosions behind the team, if that makes any sense.

If there is any justice in the world, this cover will have New Cap yelling, "Okay Axis, here we come!"

On a different note, when should we just refer to Bucky as Captain America instead of New Cap? I'm willing to make the switch if you are.

Mr. Epting, I have no words!

Wow! That's a sweet cover, hopefully it will be in the trade.

WOW! That is amazing Steve! It's one of my favorite works I've seen... I especially love the way you have the Torch's and their fire trail!

Was the rock outcrop designed to look like the head of a bald eagle as well or is that just me?

Raphael, Jay, Rogerio, Rory, and Dan - thanks for the comments. I'm glad you all dig the cover.

Jason Latino - Actually, we all do refer to Bucky as "Cap". I wanted to be specific here though, because the Steve Rogers Cap is actually in this book as well, and to point out that this is a shot of the Invaders being led by a different Captain America than we're used to seeing.

Dan - It wasn't intentional but you're right. There must have been some subliminal thinking happening while I was working on this!

I'm a Belgian fan of comics, who has a special interest for your work, especially on cap America (my all-time favorite superhero). I just discovered your blog, I tried to contact you for a long time, I hope this way will be successful.
Would you be so kind to drop me a line at dleonar1@kcc.com

Thanks, for clearing up the "New Cap" issue for me. It really is time to move on, I guess I'm still in denial. You guys are telling amazing stories, and I love missing Steve as much as the cast.