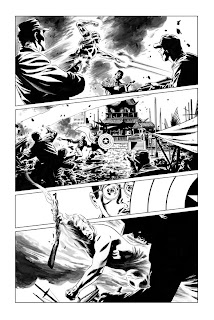 (click image to enlarge)
The above image brought to you courtesy of Captain America #46 - in stores today! If you're undecided, you can see a preview here. 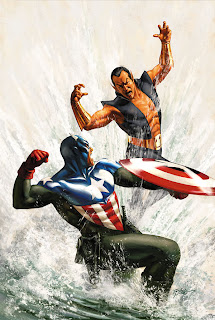 (click image to enlarge)
Posted by Steve Epting at 9:47 AM 11 comments: 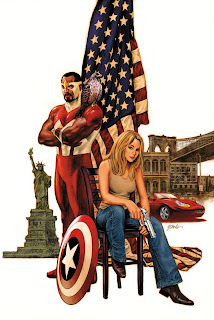 CAPTAIN AMERICA #49
Written by ED BRUBAKER
Pencils by LUKE ROSS
Cover by STEVE EPTING
The most important issue of Captain America since issue 25 is finally here! Sharon Carter's dreams are forcing her to relive the death of Steve Rogers -- and her time under the control of Dr. Faustus. But will these dreams also reveal hidden secrets about what she saw and did the day Steve died? By Ed Brubaker and Luke Ross.
32 PGS./Rated T+ ...$2.99

This is my 28th cover painting, and it's certainly not in any way a departure of what I've been doing stylistically. I'm conflicted over my approach to the covers. I want to do more loose, expressive, painterly pieces (note Boba Fett's cape, for example), but I have established a certain look for the covers of Captain America, and I like the idea of keeping the run consistent. For now, this is the side that's winning.
Posted by Steve Epting at 1:28 PM 26 comments: 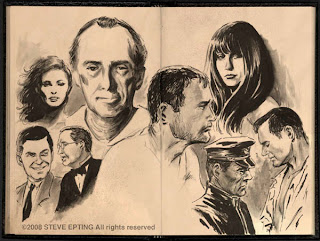 Despite some previous announcements, it turns out I will not be appearing at the New York Comic Con after all. It's really just a case of bad timing, which is a bummer because I was really looking forward to it. Apologies to all of you who were hoping for commissions and/or con sketches, but I hope to be there next year since it is one of my favorite shows. As for other Con appearances in 2009, I have tentative plans for both San Diego and Heroes Con in Charlotte. I'll post more about any future appearances when plans are finalized.

UPDATE: At the 2009 New York Comic Con, my original art agent Spencer R. Beck of The Artist's Choice will be set up at BOOTHS G - 3 to G - 9 in the Artist's Alley. He will have available all of my artwork currently posted for sale on his website here.

Additionally, he will be premiering some Captain America artwork that has never before been offered for sale publicly - maybe even a cover or two - so stop on by.
Posted by Steve Epting at 2:29 PM 6 comments:

After ending 2008 with a total hard drive meltdown, I'm back up and running for the new year. I didn't lose everything, but I did lose quite a bit of non-critical data that I was lazy about properly backing up. Lesson learned (the hard way). Anyway, here's a Boba Fett painting I did about a month ago to kick off 2009. Happy New Year everybody!