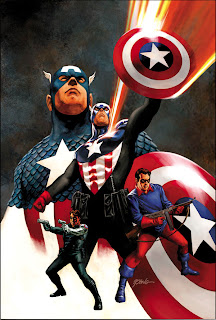 (click image to enlarge)
No, you didn't miss 449 issues. After Captain America #50 in May, the book will return to it's original numbering making the next issue #600. Here's how it's described in Marvel's June 2009 Solicitations:

CAPTAIN AMERICA #600
Written by ED BRUBAKER with MARK WAID, ROGER STERN & OTHERS
Pencils by BUTCH GUICE, LUKE ROSS, DALE EAGLESHAM & OTHERS
Cover by STEVE EPTING
50/50 Cover by ALEX ROSS
Where were you when Captain America died? It's the anniversary of the day Steve Rogers was killed, a day of reflection and mourning in the Marvel U...a time to look back on the things Steve did and what he stood for... or is this issue actually the beginning of the most wicked plot twist since issue 25? Yeah, actually it's both. Plus, contributions from Cap creators past and present, including a very special essay by Joe Simon, a classic story from Cap’s Golden Age, a full gallery of 600 Cap covers, and more anniversary shenanigans than you can shake a shield at!
104 PGS./New and Reprints/Rated T+ ...$4.99

A fairly straightforward cover of James Buchanan Barnes in his three identities all under the watchful eye of Steve Rogers. It should be a great issue and I'm looking forward to reading it.
Posted by Steve Epting at 11:00 PM 16 comments:

(click image to enlarge)
Wow, I apologize for the long absence from the ol' blog. I didn't realize it had been this long. Hopefully you all didn't wreck the place while I was gone. I should be back to my regular 2 - 3 times a week posting from now on, provided I can come up with something to show you. For now, here's another sketchbook page I filled up a while back but just now got around to scanning.
Posted by Steve Epting at 1:04 AM 10 comments: