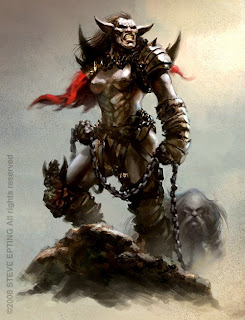 Another older speedpaint - this time it's a female Orc warrior that was done for a weekly contest on a concept art website.
Posted by Steve Epting at 10:22 PM 2 comments: 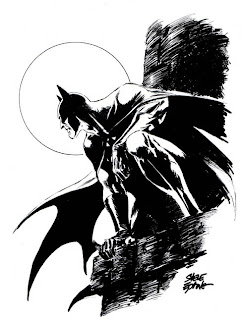 (click image to enlarge)
Posted by Steve Epting at 10:39 AM 3 comments: 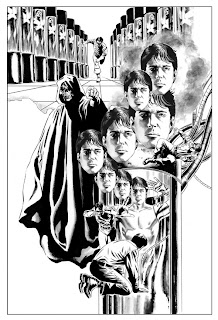 Now that I've cleverly titled this post with a made up word (thus insuring that it will never turn up in a search), I'll get to point and post some art. Several people have already posted the Steranko homage that ran in Cap #31 on various blogs and message boards, so in addition to those pages, I'm posting the black and white line art above. Ed Brubaker has made no secret of his love for Steranko's all too brief run on Captain America (which I share, by the way) and included this scene as an homage to Cap #111 (1968). I'm really pleased with the way it turned out, even down to Frank D'Armata riffing off of the color palette that was used in the original. 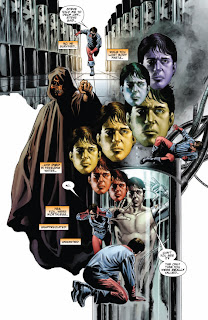 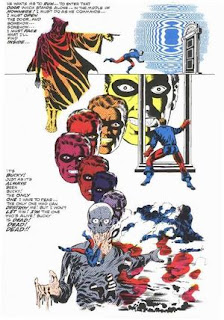 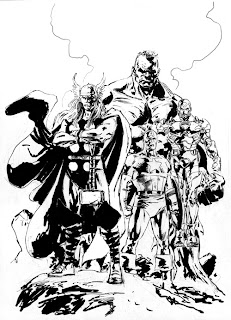 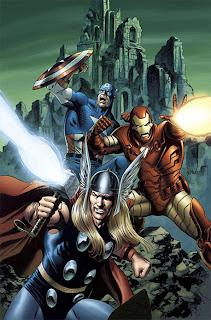 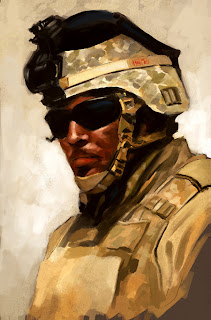 (click image to enlarge)
So here I am, looking through some older speedpaints, and I realize how much I enjoy the look of the looser strokes I was using when I didn't really care about the outcome, and I knew nobody would be seeing the end product (unless I wanted them to). Part of the reason for this look is that I was teaching myself how to paint in Photoshop and wasn't bothering to noodle in the details - just focusing on the broad strokes and learning how the brushes behave. I don't necessarily dislike the tighter rendering I've used on the Captain America covers, but I really want to use a more painterly style eventually. We'll see if it happens.

For the record, this was done from reference sometime last year.
Posted by Steve Epting at 11:11 AM 4 comments: 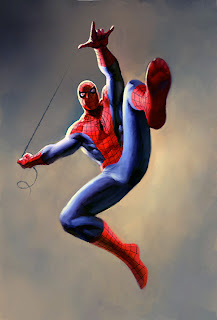 As a follow-up to my last entry, which featured the oldest surviving artwork from my childhood (both of which just happened to be drawings of Spider-Man), here's my most recent version of Spidey - a speedpaint from sometime late last year. Unfortunately, there's some pixelation of this image, but I couldn't find a higher resolution version.

By the way - yes, I changed the layout of the blog again. I'm still trying to find a template I like until I learn how to build my own.
Posted by Steve Epting at 10:55 AM 6 comments: 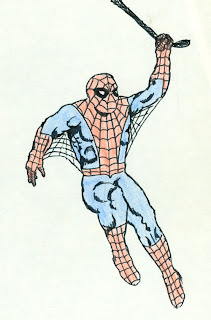 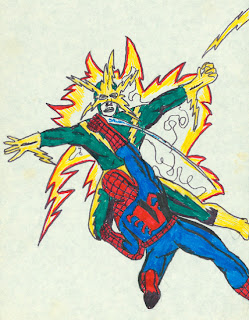 Bear with me for a little bit of stupid self indulgence. Today I was going through some unpacked boxes from our last move (3 1/2 years ago!) and came across some very old artwork. Sadly, there is no date on either of these masterpieces, but it's safe to say that they were produced when I was quite young. If I had to guess, I'd say I was somewhere between 7 - 10 years old when these were drawn. No doubt that titanic Spidey/Electro battle was inspired by a reprint of The Amazing Spider-Man Annual #1, which was my all time favorite comic book as a kid. You can supply your own sound effect for extra awesomeness.
Posted by Steve Epting at 2:07 PM 7 comments: