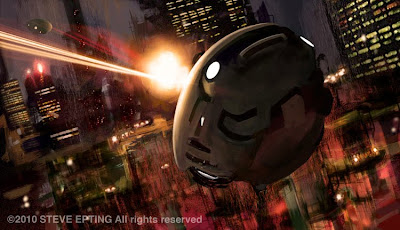 (click image to enlarge)
As I mentioned in my last time, I have a few more warm up/speedpaints to post. Most of the time when I start these, I have no idea what they will turn out to be and I just make it up as I go along. This one ended up as some sort of Science Fiction Blade Runner riff. Definitely a change of pace from the various knights I've been painting (although I have another one of those waiting in the wings).
Posted by Steve Epting at 1:45 PM 1 comment: 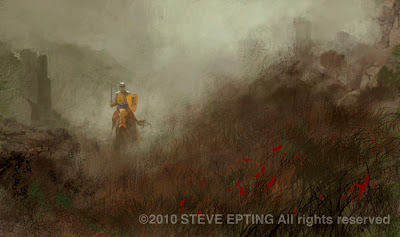 (click image to enlarge)
Another quick warm up painting from earlier this week. I've got a few more I'll be posting next week.
Posted by Steve Epting at 12:51 PM 6 comments: 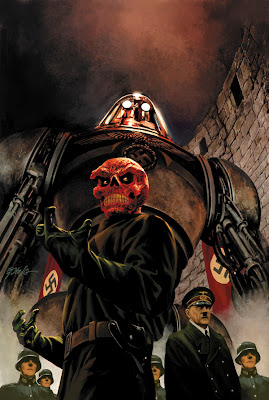 (click image to enlarge)
The Marvels Project #7 hits the shelves in two short weeks on March 24th. What will you find inside? From Marvels' online catalog:

Cap meets Bucky! The origin of the Destroyer! The interrogation of the Sub-Mariner! And it's all leading up to the Nazis' conspiracy to bring the US into World War Two!

Below is the original cover sketch. It's obviously very rough, but it does its job in that it shows essentially what the basic elements of the actual cover painting will be. As you can see, quite a bit of compositional shuffling went on as I worked on the final image, but this was submitted with the understanding that it's a basic framework that I'll be working from, not an image set in stone that I'll follow slavishly. After so many years working with my editor, I can get away with a pretty rough sketch for the approval process, since he trusts me to turn it into something that's actually printable. Incidentally, the top portion of the sketch is left blank because that area will be covered by the banner logo. 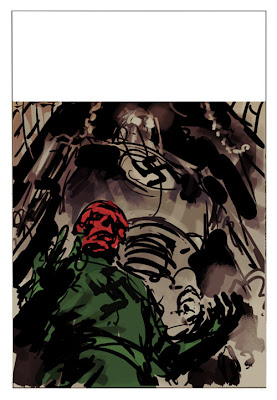 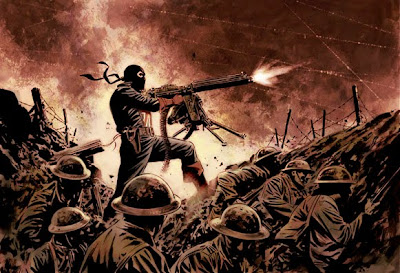 (click image to enlarge)
Here's a quick color experiment I did using a panel from an upcoming issue of The Marvels Project. That's the original Union Jack fighting in the trenches during WWI. Strangely enough, despite all the digital painting I've been doing over the past few years, I don't think I've done any coloring of black and white line art. It's something I'd like to try to do more of.
Posted by Steve Epting at 6:27 PM 9 comments: