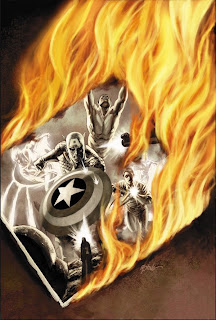 (click image to enlarge)
Yes, it's that time again: when Marvel leaks out some previews of upcoming books, in this case for March 2009, featuring Captain America #48. Here's how Marvel describes the issue:

CAPTAIN AMERICA #48
Written by ED BRUBAKER
Pencils & Cover by STEVE EPTING
The New Captain America faces the crimes of his past as the Winter Soldier as the Sub-Mariner and the Black Widow struggle to stop a new foe from unleashing a deadly attack on the world! By the best-selling Eisner, Harvey and Eagle award-winning team of Ed Brubaker and Steve Epting.
32 PGS./Rated T+ ...$2.99

This cover presented a new challenge in that I haven't ever really tried to paint fire before (at least not this close up). All in all, I don't think it's quite as successful as another recent painting challenge I had with splashing water, but it's always fun to try something new. Anyway, the focus of the image is the Invaders, and that's always a good thing.
Posted by Steve Epting at 4:53 PM 5 comments: 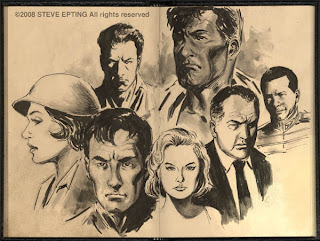 (click image to enlarge)
More of the same. I broke out the old crowquill pen for the three smaller faces on the right side.

These pages are all starting to look the same to me, but you can never get enough practice drawing faces. On the other hand, the same thing applies to figures, so I think I'll try to do more of that on future pages.
Posted by Steve Epting at 4:27 PM 10 comments:

In a previous post I mentioned Alchemy - a free sketching program that is geared toward spontaneous visual experimentation, and since then I've spent the past several weeks slowly transforming an Alchemy sketch into a finished painting. I say slowly because as usual, I only work on stuff like this a little bit at a time - usually 10 or 15 minutes in the morning while I'm trying to wake up.

Here's the initial Alchemy sketch. It's not totally arbitrary in that you can get certain shapes to go in specific directions as you draw, but a lot of what happens is completely random. In this case it is supposed to represent some sort of armored soldier - 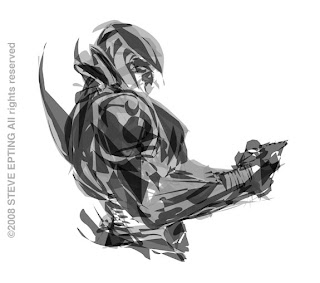 (click image to enlarge)
I used this as the starting point for the painting below and as you can see, quite a bit of what was in the initial sketch survived to the finished piece. 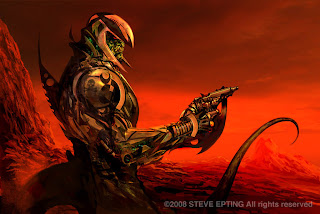 (click image to enlarge)
What's cool is that there are dynamics with the shapes and how they interact that I would have never come up with on my own and I think they add a lot of visual interest. On the other hand, none of it looks very practical and I would hate to have to attempt to draw that armor over and over and from different angles.

Also - Alchemy Space Lizard would be a kick-ass name for a band.
Posted by Steve Epting at 1:18 PM 7 comments: