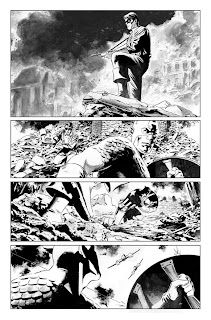 (click image to enlarge)
Page 3 of the upcoming Captain America #31. See this page in color (along with 4 others) here.
Posted by Steve Epting at 1:36 PM 2 comments:

(click image to enlarge)
An upcoming flashback panel depicting a scene that should be familiar to Captian America fans.
Posted by Steve Epting at 12:26 PM No comments:

I discovered something great earlier this week - this blog.

So far there is only one post on it, but damn, what a post! - 31 huge scans of J.C. Leyendecker Saturday Evening Post covers. They were posted back on August 2 and there's been no new activity since, but I hope we'll see more eventually. In the meantime, if you can tear yourself away from the sheer awesomeness that is the Leyendecker blog, be sure to check out these essays at the always excellent Illustration Art Blog.
Posted by Steve Epting at 10:12 PM 3 comments: 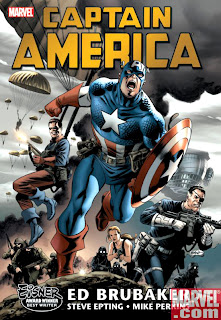 (click image to enlarge)
See that up there? That's the Captain America Omnibus featring issues 1-25 of Captain America vol 5, as well as the 65th Anniversary Special and the Winter Soldier one-shot. It also has tons of extras including sketches, cover roughs, character designs and interviews with Ed Brubaker and myself - all in one handy volume. It's 744 pages. It's also heavy. Since it's past midnight here on the east coast, I can legally announce that this one of a kind collection of the best in comics liturature is available TODAY at finer comic shops everywhere.

And no, the madness doesn't end there, because also on sale today is Captain America #30. It looks like this - 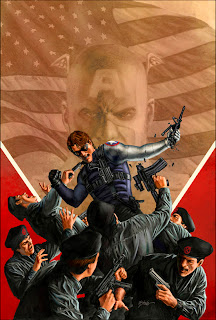 Okay, that's it. Commercial's over.
Posted by Steve Epting at 1:08 AM 2 comments: 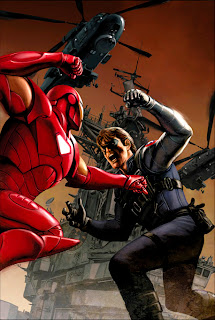 (click image to enlarge)
Marvel has leaked out some of December's solicitations a day early, and as luck would have it, Captain America 33 was among the chosen few. Here's how Marvel describes the issue:

CAPTAIN AMERICA #33
Written by ED BRUBAKER
Pencils & Cover by STEVE EPTING
The Winter Soldier faces off against Iron Man!
The man at the top of Bucky's hitlist is finally in his grasp... but saying anything more than that will spoil all our surprises! Still, the final moments of this issue will stun fans just as much as the final moments of Captain America #25 did!
32 PGS./Rated T+ …$2.99 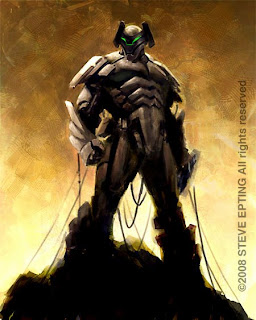 (click image to enlarge)
Nothing original here - in content or composition. This is an old speedpaint that I reworked with some new brushes. Something occurred to me while working on this - if I had done this as a pencil drawing first, I would never have ended up with the armor as it appears here. By going straight in with color and using light to define planes spontaneously, you can get some unexpected results. The Frazetta influence is obviously quite strong here. I wasn't consciously emulating him, but Frazetta has cast a shadow so long and pervasive that virtually every fantasy painting seems to be informed in some way by his work. After I finished some color adjustments, I was certain that this was very derivative of a specific Conan painting, and sure enough, a quick search proved me right - Like I said, nothing original here.
Posted by Steve Epting at 11:17 AM 3 comments: 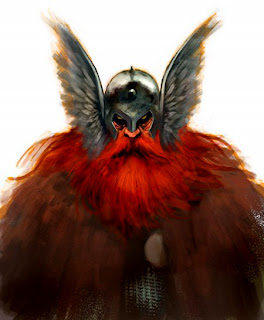 (click image to enlarge)
This morning's speedpaint is some sort of Viking barbarian. There's a bit of a cartoonish element about this one that I kind of like, but there was no real thought put into it at all. Still, I definitely wasn't going for realism here. This was done in about 20 - 30 minutes in Photoshop 7.
Posted by Steve Epting at 11:10 AM 1 comment: 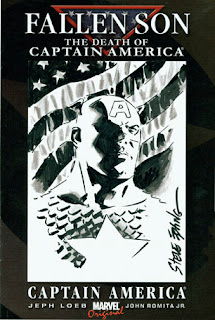 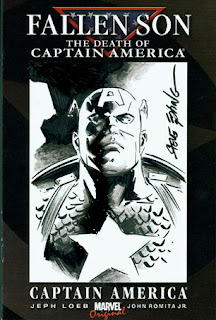 Two Fallen Son sketch covers I did that eventually found their way to the magical land of eBay.These were both drawn with one of those PITT brush pens (and a little bit of prismacolor pencil). Surpisingly, the cardstock cover was actually a pretty decent drawing surface. I've got a few more of these laying around here somewhere that I'll post eventually.
Posted by Steve Epting at 10:00 AM 3 comments: