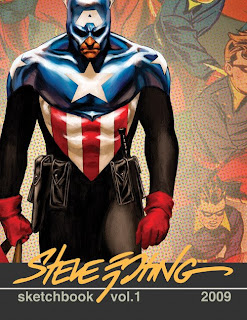 Will the sketchbook become available to those wretched souls like Ol' Groove who won't be able to make it to the SD Con?

Any sketchbooks left over after the show will be available for purchase. I'll make an announcement here with the details.

Still loving your blog by the way!

If there are any sketchbooks left over :-P

Hell yeah! One more reason (as if I needed one anyway ;)) to come to visit you at your table :)

P.S. Truly enjoyed the interview and the preview art over at Newsarama :)

Awesome! Will you be at the table on preview night (22nd) too?

Also, what are the prices for the sketchbook and print? I'm gonna be broke next week at the con :)

Matt E - I'll be at preview night, but I doubt I'll be set up at the table until Thursday morning.

Steve, have fun in San Diego. Wish I was going!

Steve - Are you not doing the cover for The Marvel Project #3? Marvel is soliciting it with a McNiven cover.

Al, they have now decided that Steve McNiven will be doing the regular covers and I will be doing variants. I'll post my cover for issue #3 soon.