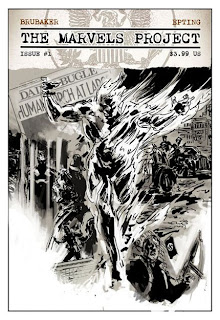 (click image to enlarge)
Posted by Steve Epting at 1:08 AM

I love that bottom sketch!
the process is always just as good as the final product to me.
I love to see how things are done.

This cover is SMOKIN' (pun fully intended) and the rough sketch is way cool (no pun intended this time ;)) too :D

The cover is great. But I also really love the cover design for the logo. I'll be there when this goes to print. Looking forward to it!

Thanks Jokester and Francesco. I frequently like the sketches much more than the finished product. They have more of that raw energy that gets lost the more you polish it up.

Francesco - looking forward to this weekend!

Anthony - Thanks man. I actually designed the logo for this book, so I really appreciate your comment. I'll probably do a post in the future about the evolution of the logo and how it came about.

The patience with the flames pays off. Torch looks amazing. It's got a classic feel of the way Torch used used to be drawn and still feels modern and realistic

Steve,
Great looking cover - it looks "old" in a good way. The classic looking police cruisers and the style looks like an old movie. Can't wait to check these out!

Started a thread to give some exposure to The Marvels Project & your board on my site, www.statuemarvels.com.

Wow, this art is amazing. Great stuff. Love it! Just picked up the comic today, so I'm looking forward to reading (and seeing) more!

I'm from the Philippines. Just bought the comic last night. I just love the way Human Torch was drawn and painted. The intricate details,every single part of it...I'm looking froward for #2..It's Awesome!