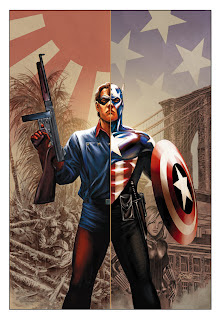 CAPTAIN AMERICA #43
Written by ED BRUBAKER
Pencils by LUKE ROSS
Cover by STEVE EPTING
Bucky has survived his first major trial as the new Captain America, but now a villain from his past - both as Bucky in WW2 and as the Winter Soldier during the Cold War - has come to the U.S. and he'll have to face his history just as he's finding his feet in the present. The beginning of a gripping war and espionage tale, with some familiar faces for long-term Cap readers, as the New Captain America moves further into the Marvel U. And for this action-packed three-part story, award-winning Cap writer Ed Brubaker is joined by acclaimed artist Luke Ross (Jonah Hex, Samurai).
32 PGS./Rated T+ ...$2.99

This issue marks my 20th painted cover, and it's an ongoing experiment. Next month, I'll try to post a step by step of the cover process, much like the page process in the previous post.
Posted by Steve Epting at 12:40 AM

Steve, I love your Black Widow!

I saw this cover on NEWSARAMA this morning and instantly made it my wallpaper - it's just such a brilliant image.
I never thought I'd have Bucky as the main focus of my desktop let alone have him rival Falcon for Caps best supporting character but here we are!
Look forward to the behind the scenes posts!

I recently found your blog, and have enjoyed looking through your numerous posts. I also wanted to tell you how much I've enjoyed your work on Captain America. It is always at the top of my reading list each month. You are fast becoming the definitive artist for that character. Keep up the great work.

Steve, hi, this is nick katradis. I just read your Cap #40 issue and it was awesome like always. Seeing the Cap of the 1950s fighting the man that killed his Bucky was great.
Ps: The first Cap comic i ever read was Captain America #153, written by Steve Englehart and drawn by Sal Buscema, which featured the classic battle between Cap vs: the 1950s Cap!
Keep up the great work, Steve.
nick

There are starting to be too many fill in issues.