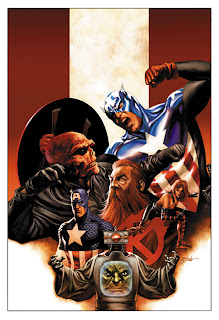 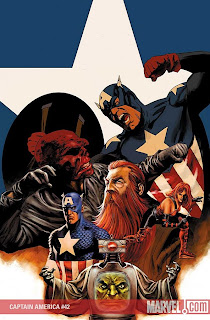 You can see my pencils on the two main figures of Cap and Red Skull with flat color underneath them. The smaller figures below are more finished, but there was still work to be done on them. I liked the graphic appeal of the star, but the dominant blue field behind it merged too much with the blue of Cap's costume and made him recede into the background. Cap (and the Skull) needed to be the focal point and the cool blues of his costume contrasted much better against the warm red and white stripes.
Posted by Steve Epting at 2:38 PM

Man, I love your covers. You really have been pushing the limit with the compositions lately. It's nice to have a break from single figure pin ups and scenes.

Excellent cover (as always)!!
I'm eager to read this issue !!

I too like the star graphic but the red/white band 'pops' better and adds the ever so slight illusion of blood running down the book.

Hope all is well.

Another great cover. Just great! I can't wait to see how everything wraps up eventually in #50.

I hope you, Brubaker and co. decide to stay on the book indefinately (*crosses fingers*)

Thanks for the comments everyone!