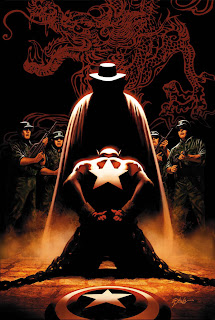 (click image to enlarge)
Marvel has released a preview of their February 2009 Solicitations, including Captain America #47. Here's how Marvel describes the issue:

CAPTAIN AMERICA #47
Written by ED BRUBAKER
Pencils & Cover by STEVE EPTING
The New Captain America in the hands of the enemy in China! His secret past as the Winter Soldier in danger of coming to light! And what are his old Invaders teammate the Sub-Mariner and the Black Widow doing while Bucky Barnes faces his darkest past? By the best-selling Eisner, Harvey and Eagle award-winning team of Ed Brubaker and Steve Epting.
32 PGS./Rated T+ ...$2.99

A pretty straightforward cover with a symmetrical composition, but I'm fairly happy with it. I remember back during my Crossgen days I sort of got stuck in a rut doing several covers in a row with this same type of composition featuring a central figure until Butch Guice snapped me out of it. I'm certain it won't happen again here though, because I've already done the cover to issue #48, even though I can't show it to you yet.
Posted by Steve Epting at 12:59 PM

I really like the past couple of covers. Sure they're symetrical but they're also iconic images which are going to stand the test of time. They keep getting better and better.

This cover is amazing Steve! One of the best you've done this year.

great one! I love the slight glow on Cap's shoulders and the baddie's cloak. Little touches like that really make it sing!

I agree, the glowing effect really stands out on this cover. I'm also really enjoying how the covers are reflecting what is going on within the issue; so many covers these days are just pin-ups that don't tell you anything about the contents, and that isn't the case on Captain America.

Ditto what the others said.
You obviously get a lot of joy out of designing covers and they're usually the ones that stand out on the shelves!

I like the Butch Guice pointer too - it makes me long for a comic with a dvd extras section :D

Thanks for the comments everyone. I appreciate it!