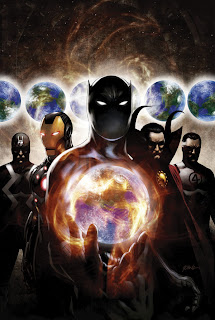 Here's the variant cover I did for the first issue of New Avengers. The always amazing Jock is doing the regular covers and I, along with a few others, have provided variants. New Avengers #1 ships January 2, 2013 - written by Jonathan Hickman with art by me.
Posted by Steve Epting at 3:34 PM 1 comment: 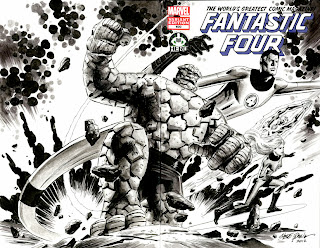 Well that was quick. No sooner than I posted the link to the Hero Initiative Fantastic Four 100 project the auction for my cover has gone live. If interested (in my cover or any of the others) please go HERE and bid!
Posted by Steve Epting at 2:04 PM No comments:

Similar to last year's New Avengers sketch covers, the Hero Initiative will soon begin auctioning off Fantastic Four #600 sketch covers by 100 different different artists. My humble contribution is posted above and I will be updating when the auction goes live in case any of you are interested in bidding (and supporting a worthy cause in the bargain). Head on over to the gallery at the Hero's Initiative site and check out all of the amazing work HERE.
Posted by Steve Epting at 12:18 PM 1 comment: 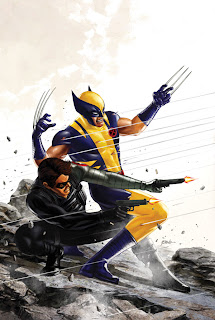 Winter Soldier #12 is out today featuring Wolverine (or so I would assume given what they asked me to put on the cover). One thing is certain - the interior art by Butch Guice is incredible. Check it the preview HERE.
Posted by Steve Epting at 1:53 PM 1 comment: 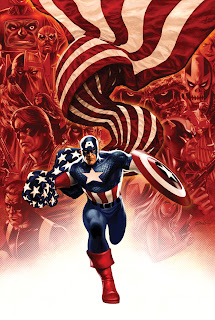 Captain America #19 came out today, marking the end of Ed Brubaker's 8 year run on the book. I'm proud to have been the primary artist for the first half of that run and just as proud to come back for the issue that brings it all to a close. Frank D'Armata also returned to color it for us just like the good old days.

A few reviews have started turning up: 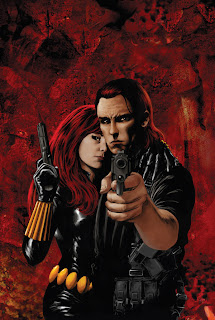 This was done much the same way as the cover for issue #8. Primarily standard colored line art but with some areas painted on top. And if you're thinking that the guy on the cover doesn't look like Bucky, you are correct. It's not Bucky.
Posted by Steve Epting at 9:48 AM 3 comments:

If you've ever taken an art history class (and probably even if you haven't) you most likely know the work of Roy Lichtenstein. He was one of a number of artists who rose to fame during the 60's pop art movement. As his Wikipedia entry says - "Roy Lichtenstein (October 27, 1923 – September 29, 1997) was a prominent American pop artist... his work was heavily influenced by both popular advertising and the comic book style".

Lichtenstein's most famous paintings were based on comic book panels drawn by such giants as Jack Kirby, John Romita Sr., Russ Heath, and many others, almost always without attribution. Though these pieces were not exact copies, they were undeniably based specifically on work that other artists had created. This practice made him a highly controversial figure among the fine art world as well as comic book fandom. Lichtenstein had pretty much given up copying comic book panels by the time the 60s had come to end, though later in his career he did return to the practice somewhat by incorporating comic panels into larger works.

This brings us 1994 and a piece by Lichtenstein called Large Interior With Three Reflections. Lichtenstein used an image from an issue of The Avengers that I drew early in my career and incorporated it into part of the large mural. Let's start with his original preliminary sketch for that portion of the image: 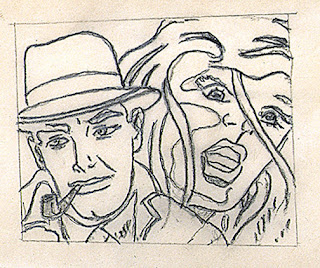 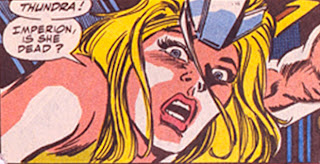 Notice that the headpiece does not appear in the sketch. Lichtenstein also made other changes to the source material as he progressed to the drawing stage, most notably the direction of the strands of hair:

Up to this point I think it could have been debatable whether my image was the inspiration for that section of the mural, but in the finished painting the headpiece is back in place, leaving little doubt:

More on the creation of this piece, including the confirmation of my Avengers art as the source material (for that small portion of it) can be found HERE.

This was all brought to my attention originally by David Barsalou, who has an ongoing project identifying the source material for all of Lichtenstein's pieces. The comparison image below is from Barsalou's Flickr photostream. 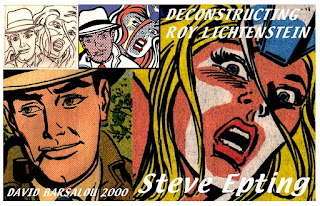 In school when I was studying Lichtenstein in Art History classes, I could have never dreamed that in a few short years he would actually be swiping some of my art. The whole thing is surreal to me and I'm not even really sure how I feel about it, but I've got to admit that part of me enjoys the notoriety of being able to say I was one of Lichtenstein's "victims". Would I be more outraged if the entire piece consisted of a single panel based on my work (like Sleeping Girl) and he had made millions from it? Probably.

The issue of how Lichtenstein produced his art and the money he made by appropriating the work of other artists without credit or compensation can become complex when looked at from various points of view - or, it can be as simple as black and white. I'll leave it for others to sort out.
Posted by Steve Epting at 8:30 AM 6 comments: 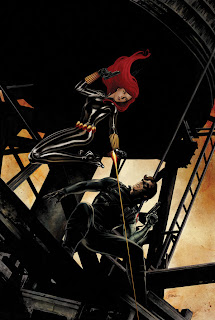 This cover is a departure from my usual painted covers, in that it is primarily a traditional ink drawing that I colored in Photoshop (as opposed to using it as the basis for a painting). There are a few places where I did paint over the black and white art, but not many. I'll be doing a bit more of this on future Winter Soldier covers, and possibly elsewhere as well.

As you can see in the line art below I forgot to draw Black Widow's belt, so I added it in while coloring. 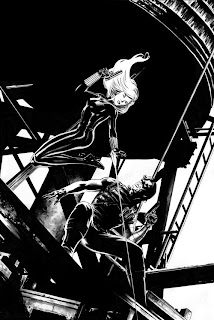 I had a great time at the Boston Comic Con a couple of weekends back. Thanks to everyone who came by! I only have a few pics of some of the sketches I did at the show and unfortunately they were all taken with a crappy phone camera. Better than nothing I suppose! 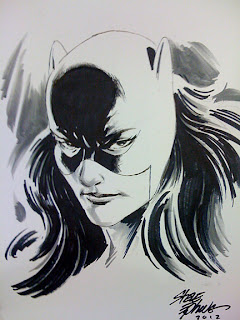 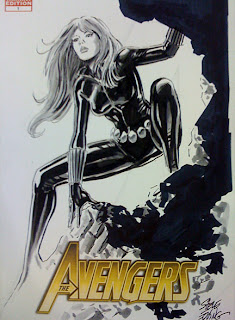 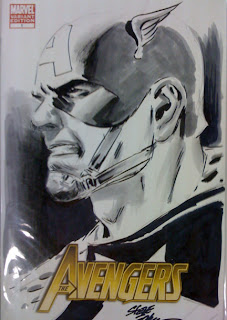 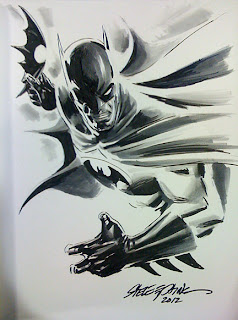 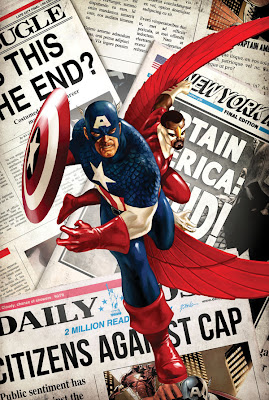 Marvel's July solicitations have been up for awhile and included in them are CAPTAIN AMERICA #15 and WINTER SOLDIER #8 - both of which I did the covers for. I really enjoyed designing the mock tabloid covers for the background of the Captain America cover. Below are each of the front pages of the papers that I created in photoshop, as well as the painted figures on their own. All of these elements were then combined (along with some visual effects) for the final image. 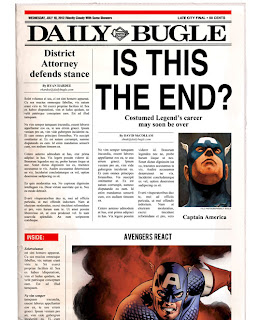 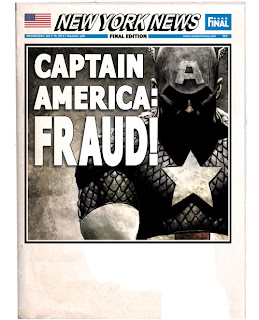 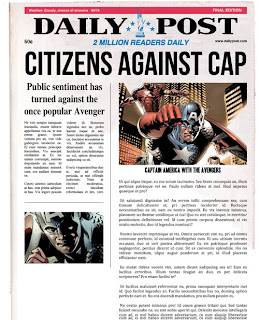 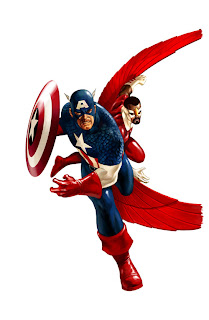 Hey people - I will be in Boston for the Boston Comic Con this weekend. This will be my first time at this particular show and I am looking forward to it. If you are in the area please come by and say hello!
Posted by Steve Epting at 12:52 PM 2 comments: 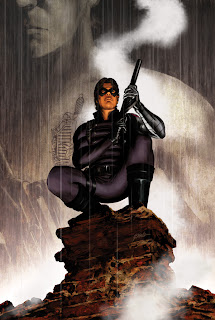 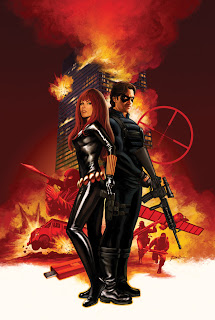 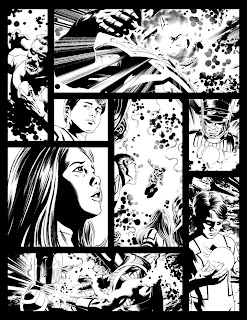 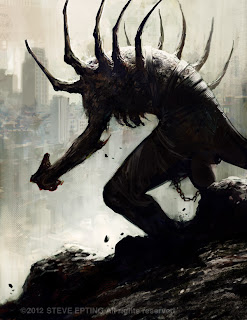 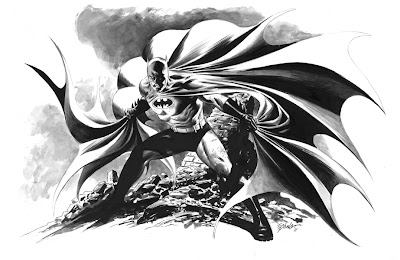 Happy New Year! That's right - it's the end of February and I'm just now posting for the first time in 2012. Sorry about that. Hopefully you will enjoy this Batman drawing and forgive me for the lack of attention I've shown the blog.