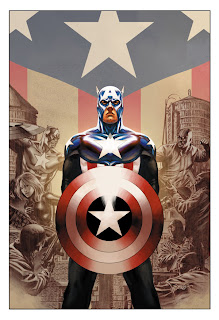 (click image to enlarge)
Marvel's December 2008 solicitations have been out for a few days, featuring Captain America #45. Here's how Marvel describes the issue-

CAPTAIN AMERICA #45
Written by ED BRUBAKER
Penciled by LUKE ROSS
Cover by STEVE EPTING
Villain Variant by TBA
It's Bucky versus Batroc and a mysterious foreign agent from his past as the Winter Soldier, as he fights to keep a secret super-weapon from falling into enemy hands! But the shocking ending of this three-parter brings a new twist to the mission... and sends our New Captain America in search of whatever is left of his old comrades, the Invaders.
From Ed Brubaker and Luke Ross - Part Three of Three
32 PGS./Rated T+ ...$2.99

This completes the trilogy of the thematically related covers, and next month we'll move on to something different.

Also, on sale this week - The Death Of Captain America: The Burden Of Dreams Vol. 2 trade paperback. 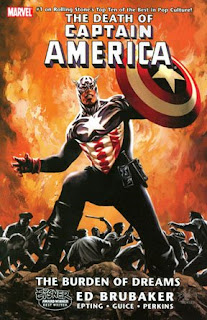 I'm very interested in seeing how the incorporation of Batroc will work in the series. The last time I remember him encountering Captain America was briefly during the Heroes Reborn storyline where he fought Cap on behalf of the Skrulls machinations.

Anyways, this is yet another great great cover. I love the awesome cover consistency that's been there throughout the entire series. Steve, I'm glad that you've been doing all the covers this time. It gives the series a sense of cohesiveness.

Thanks Raphael. I'm very happy to have done almost all of the covers, and I'm pleased that I've been able to do painted covers since issue #25. I'm hoping to experiment with different styles more, but I want the covers to be appropriate to the tone of the book, so I probably won't get too crazy.