Marvel has released some of May's solicitations and therefore revealed the purpose of the Red Skull painting from a few days ago. Here's how Marvel describes Captain America #38-

CAPTAIN AMERICA #38
Written by ED BRUBAKER
Pencils and Cover by STEVE EPTING
THE SAGA OF THE NEW CAPTAIN AMERICA CONTINUES!
Bucky Barnes never wanted to be Captain America, but he's doing his best to carry on the legacy of Steve Rogers, in his own way, while trying to save Sharon Carter from the Red Skull and his minions. But maybe he's not the only one running around in a Captain America outfit!
Part Two of "The Man Who Bought America" by the acclaimed team of Ed Brubaker and Steve Epting.
32 PGS./Rated T+ …$2.99 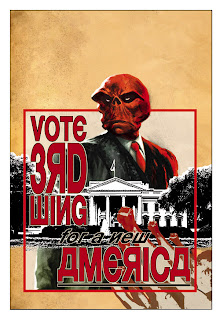 (click image to enlarge)
Posted by Steve Epting at 3:27 PM

I've always wanted to bow to the tyrannical whim of a goose-stepping white house.

Hey Steve,
This is awesome, as is all the art in this blog. I'm really enjoying it!

Thanks Theresa. It's great to hear from you. Say hi to everyone for us and hope to see you all soon!