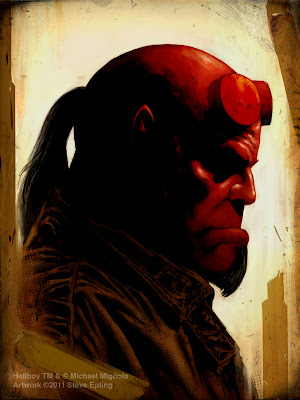 Another year, another August 21st, and another Hellboy sketch. Following my yearly tradition, I'm celebrating the 4th anniversary of my inaugural post with a sketch of Hellboy. This is painted over an old commission I did where I believe the goal was to base the drawing on a photo of Ron Perlman in his Hellboy makeup and try to exaggerate it some to make it look more like Mignola's version. Hellboy is, of course, TM and © Michael Mignola.

As always, thanks to all subscribers, commenters, and casual readers who just happen to drop by. Year 5 starts tomorrow!
Posted by Steve Epting at 10:52 PM

It's a pleasure visit your blog sir!